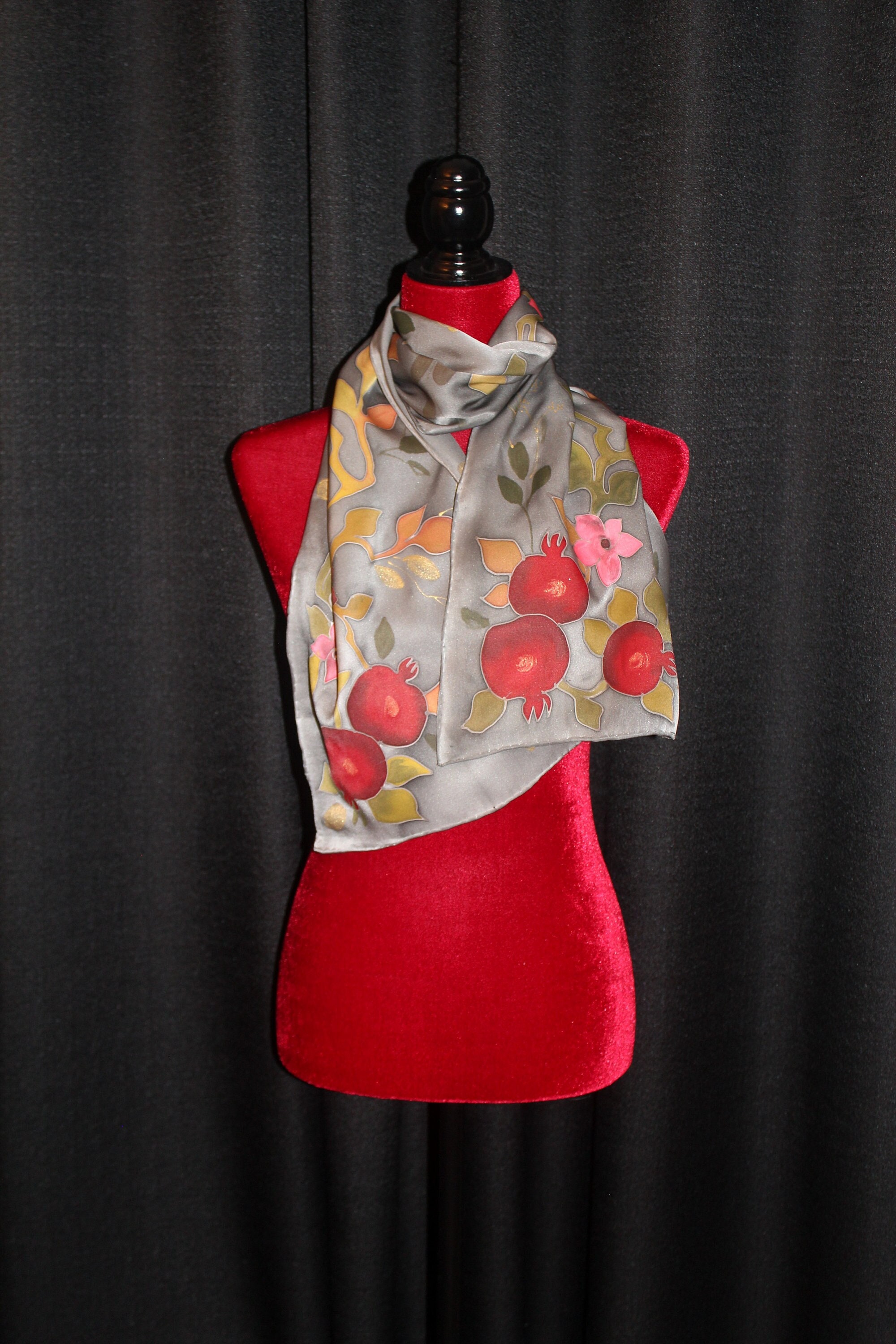 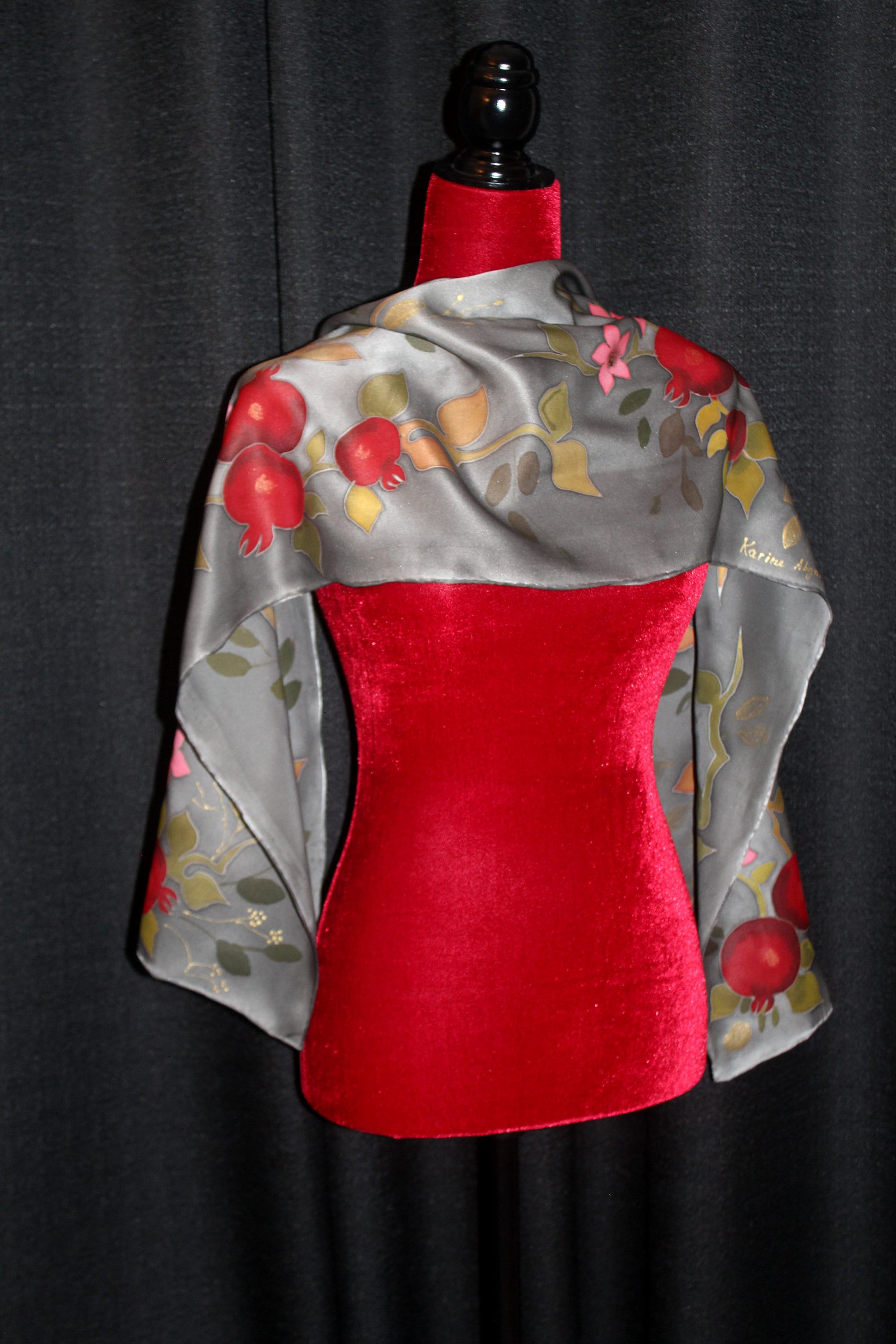 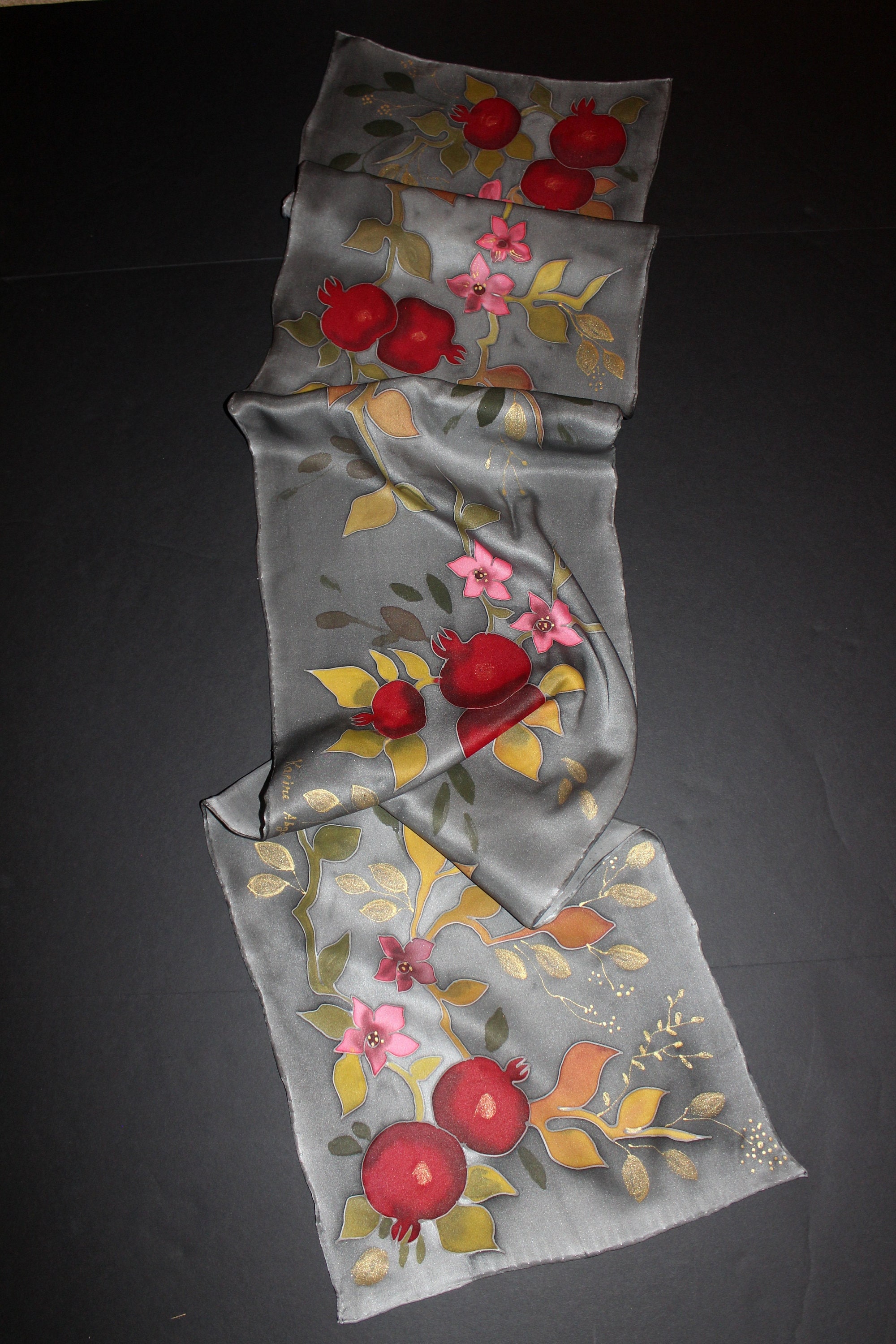 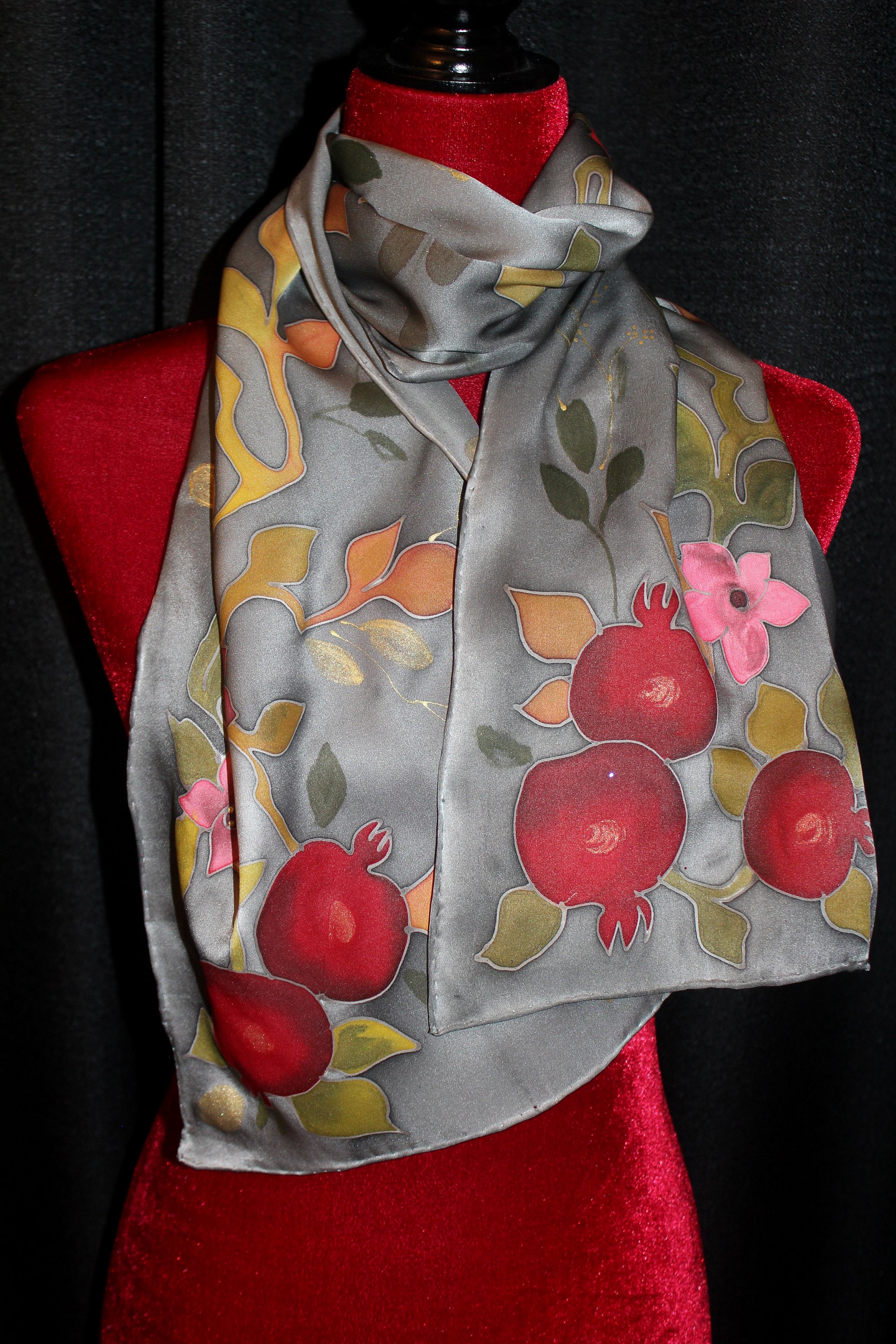 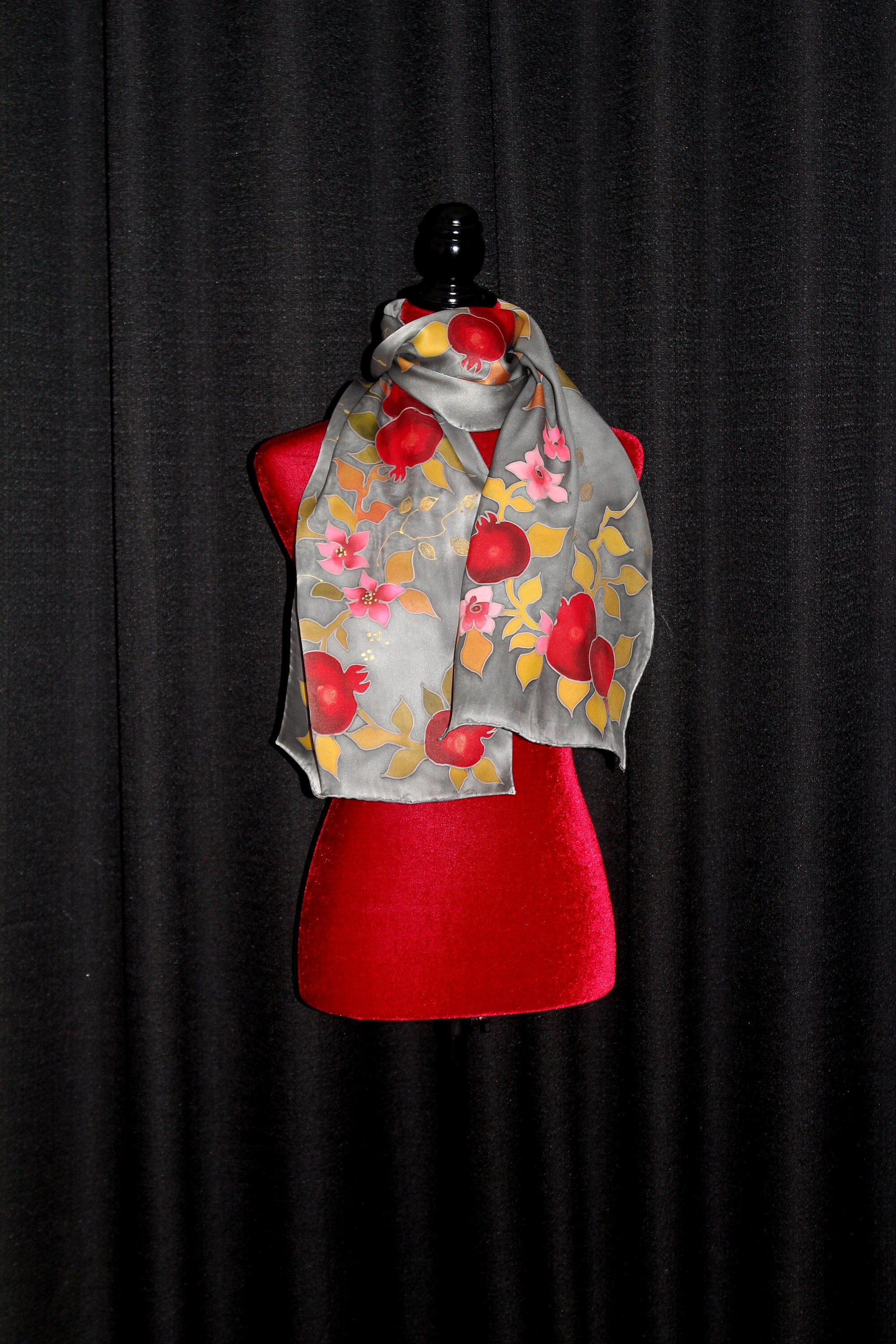 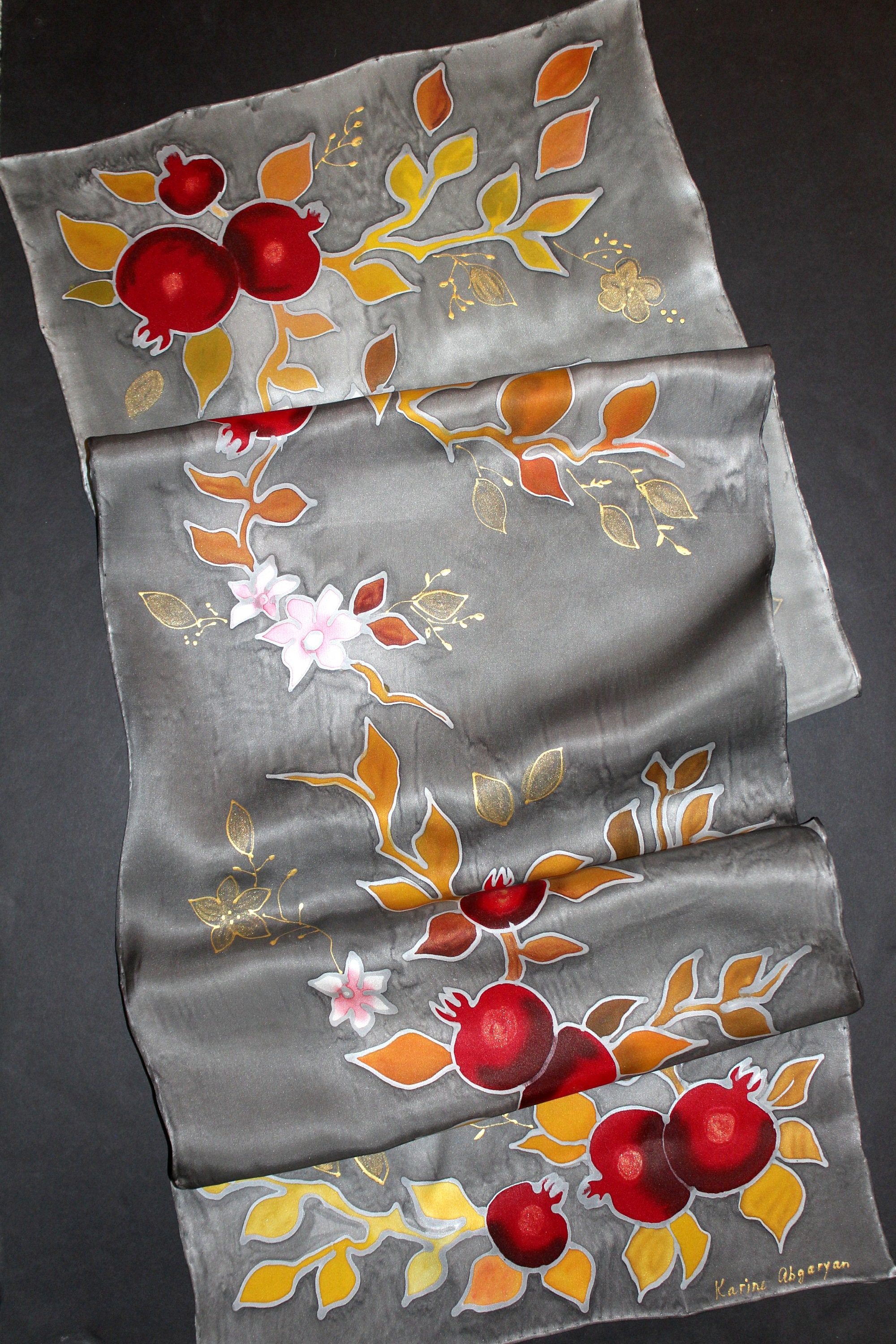 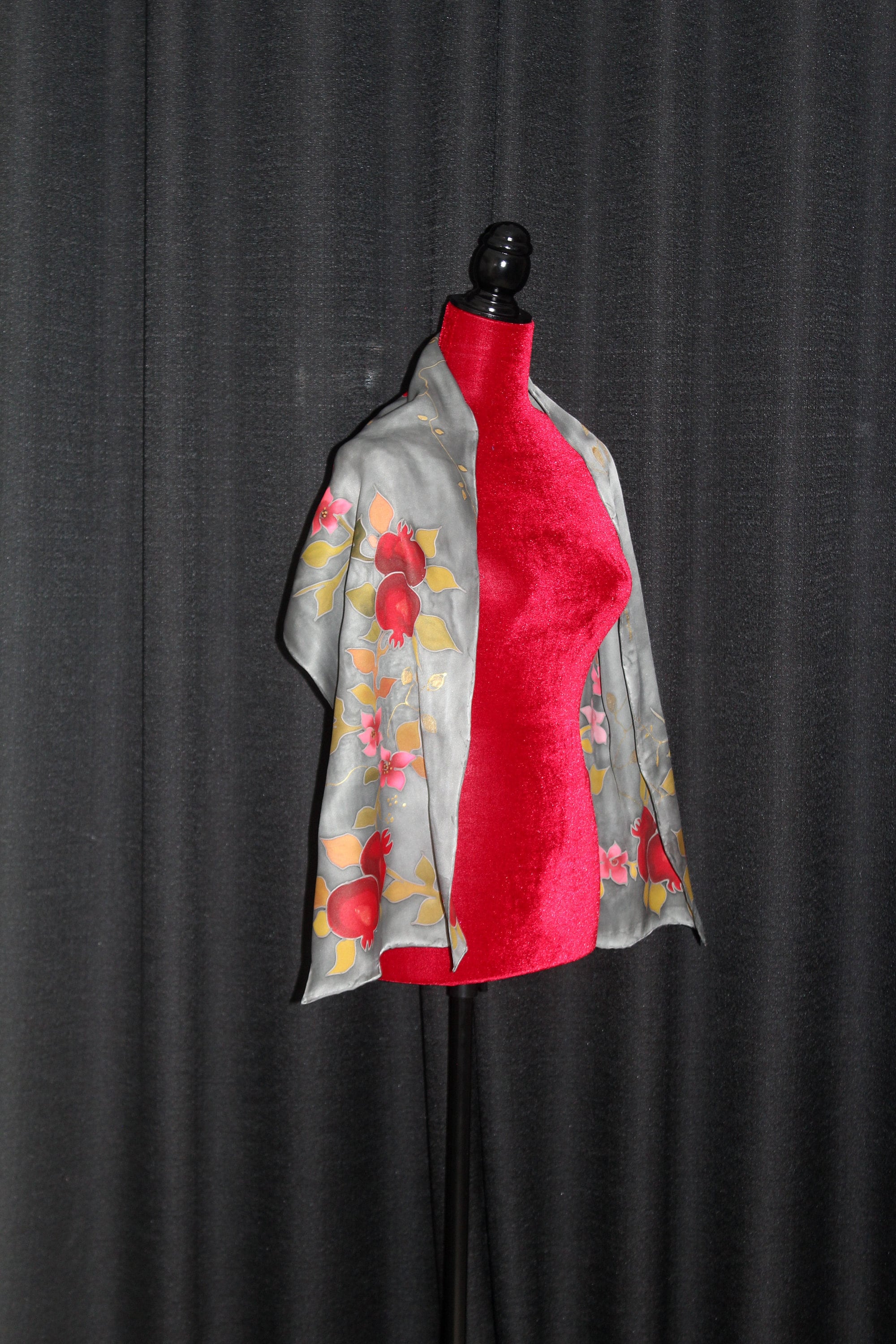 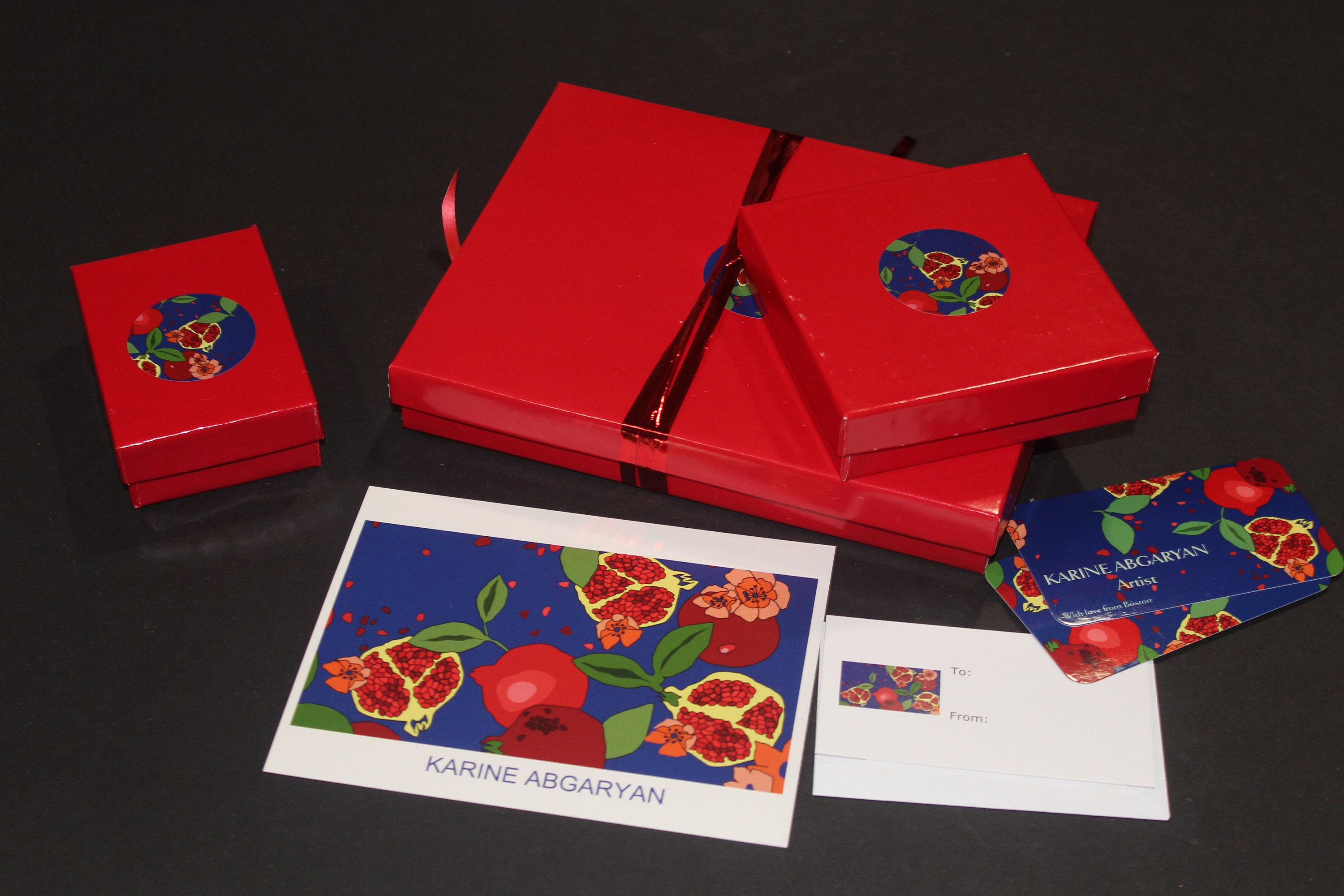 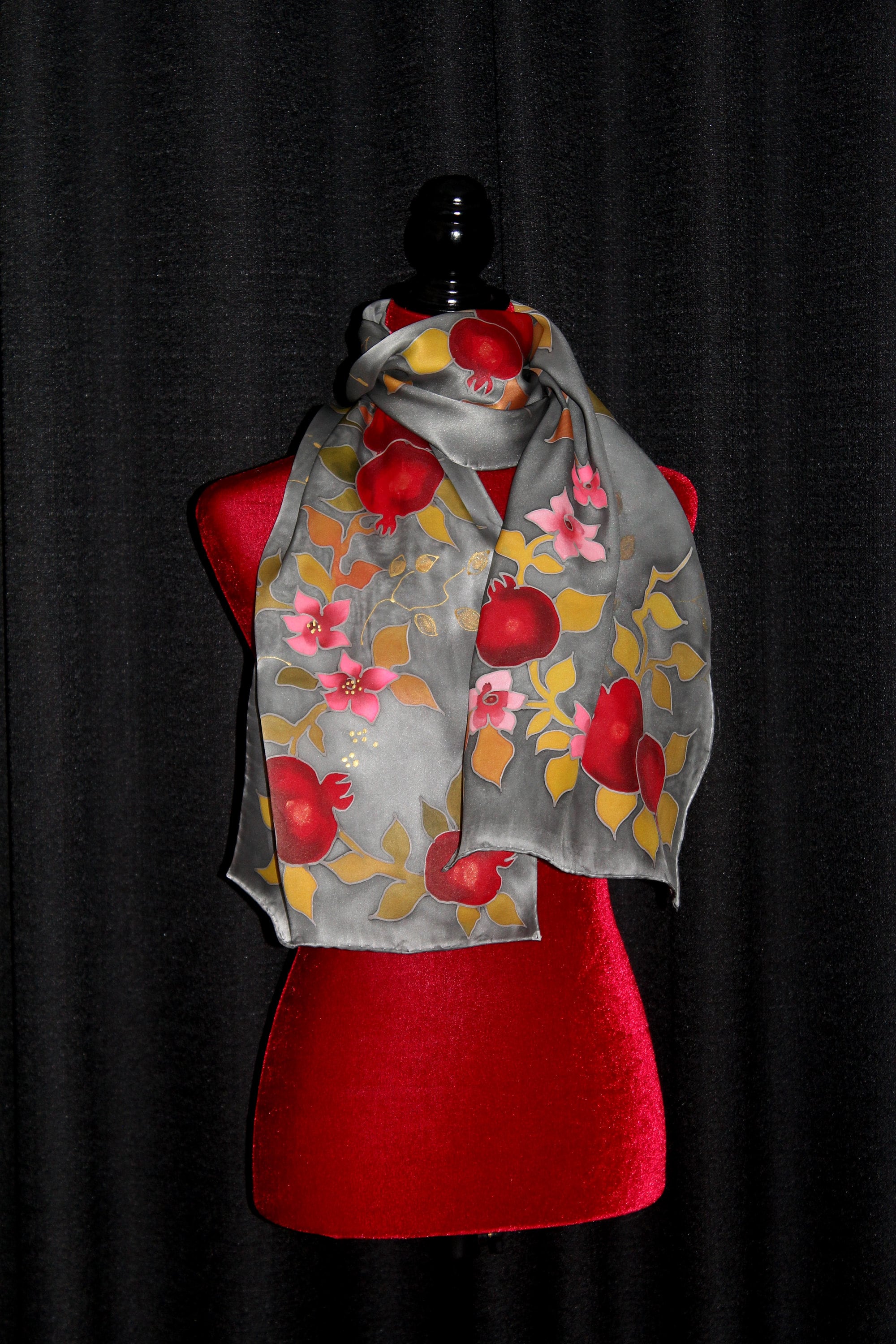 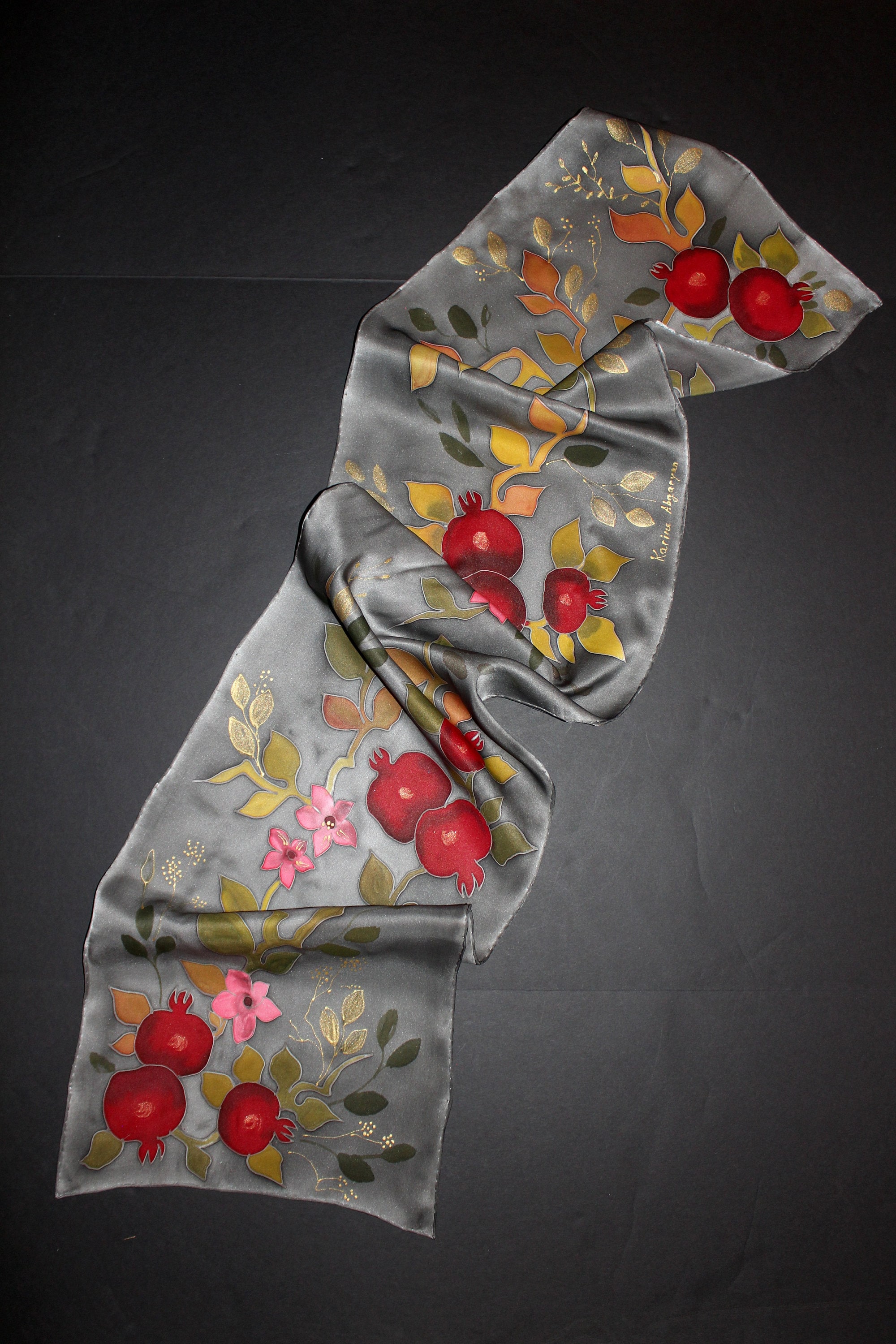 For more visit my store
https://www.etsy.com/shop/Abgaryan
Dear visitors, please note
The scarves are washable, as it has been drawn with special fabric paint. They never get discolored or change color, if you take care right way. Here is some information. Originally white silk has been dyed and painted to other colours, that`s it can be a little thick (hard).
Care instruction
• Place your silk scarf in warm water with a mild silk-friendly detergent.
• Leave to soak (no more than 5 minutes).
• Rinse with warm water
• To help keep its hydrated feel, use a fabric conditioner in the final rinse (or even a small amount of hair conditioner or vinegar).
• Rinse well in cold water.
• Lay flat to dry.
• Iron - if the scarf has dimensional painting ONLY STEAM , if it`s a regular scarf hot iron from reverse side.
Hand painted and hand rolled pomegranate scarf

9 Jewish Things About Pomegranates
Why this ancient fruit is a Jewish symbol.

1)The Pomegranate Is One of Israel’s “Seven Species.”

The pomegranate is one of the seven species of Israel (along with wheat, barley, grapes, figs, olives, and dates) listed in the Torah in Parashat Eikev (Deuteronomy 7:12-11:25).

In Jewish tradition, pomegranates are a symbol of fertility and love, winning them frequent mention in, among other biblical texts, the Song of Songs. For example (Song of Songs 4:3): “Your lips are like a crimson thread; your mouth is lovely. Your brow behind your veil [gleams] like a pomegranate split open.”

The decorative ornaments at the top of many Ashkenazi Torah scroll covers are often shaped like pomegranates and are called rimonim, the Hebrew word for pomegranate.

4)Pomegranates Are Part of the Sephardic Rosh Hashanah Seder.

5. A Pomegranate Is Often the “New Fruit” on the Second Night of Rosh Hashanah.

Many Jews use pomegranates on the second night of Rosh Hashanah, for the custom of saying a blessing over a “new fruit,” one that people have not eaten in a long time.

7. Pomegranates Continue to Grow in Israel.

Pomegranates have been cultivated in Israel (and throughout the Middle East) for thousands of years, and they continue to grow there in abundance. When pomegranates are in season, fresh-squeezed pomegranate juice is available in kiosks throughout the country. According to the Israeli Agriculture International Portal, Israel harvests approximately 60,000 tons of the fruit annually, of which about half are earmarked for export.

In Parashat Sh’lach (Numbers 13:1-15:41) in the Torah, a pomegranate is one of the items brought back by the 12 spies when they return from scouting out the Land of Canaan.
Images of pomegranates adorn the robes of the high priest, as described in Parashat Tetzaveh (Exodus 27:20 – 30:10) of the Torah.
In one story in the Talmud, the wife of a rabbi (Hiyya Bar Ashi) tests him by disguising herself as a prostitute and then seducing him, demanding he pay her with a freshly picked pomegranate. (Kiddushin 81b)

An image of a pomegranate decorated some ancient Jewish coins, including a recently discovered one from the era of the Bar Kochba revolt (second century CE).